The study, "How to deter financial misconduct if crime pays?" published in the Journal of Business Ethics, was co-authored by Maximilian B. Torres, The Catholic University of America; Alejo José G. Sison, University of Navarra; Maria Prats, Northwestern University; and Karol Marek Klimczak, Lodz University of Technology, the study's lead author.  Drs. Sison and Prats were Visiting faculty at Catholic University when the project began. The research demonstrates that, too often (almost invariably), the immediate economic benefits of illicit financial activity outweigh the eventual costs of being caught. The researchers propose that financial activity taking into account intrinsic motives, prosocial motivations, and a virtue ethics framework would link financial behavior to the quest for moral excellence and flourishing.  Moreover, it would more effectively reduce misconduct as well as the need for extrinsic punishments and deterrence.

"The median penalty handed down by the SEC in 2020 was nearly $200,000, according to the researchers; the median disgorgement, or repayment or ill-gotten gains, ordered was only $500,000."

"Business leaders can strengthen intrinsic and altruistic motivations by offering opportunities for personal development, advancement, and collaboration in prosocial activities instead of monetary incentives like bonuses, according to Klimczak." Rewards geared towards extrinsic motivations such as bonuses can be detrimental to the retention of intrinsically motivated employees who demonstrate higher integrity. Hiring managers, too, should focus on positive virtues demonstrated by job candidates, rather than honing in on hard skills or corporate experience, alone."

END_OF_DOCUMENT_TOKEN_TO_BE_REPLACED 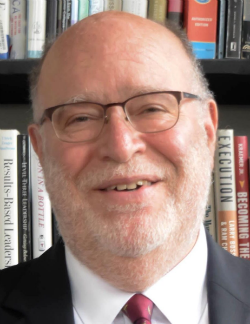 Dr. Max Torres joined Catholic University's faculty in 2014. His teaching and research center on the relationships adhering between managerial decision-making, personal character and organizational culture.  It aims to identify, model, and harness the intangible human phenomena underlying tangible, measurable results in organizations. He has won numerous awards, including the 2003 Novak Award from the Acton Institute for the Study of Religion and Liberty in Grand Rapids, MI.  He serves on the editorial board of the Journal of Business Ethics Education.

Before beginning a second career in academia, Dr. Torres worked in the financial services industry as a registered representative at Dean Witter Reynolds, and Merrill Lynch, Pierce, Fenner & Smith, both in San Francisco, CA. He served as the Executive VP of Investments at the D/A Financial Group in Orinda, CA, and was Principle of Max Torres Co. in Walnut Creek, CA.
Back to Top