A Night to Remember: Honoring our Busch School Students 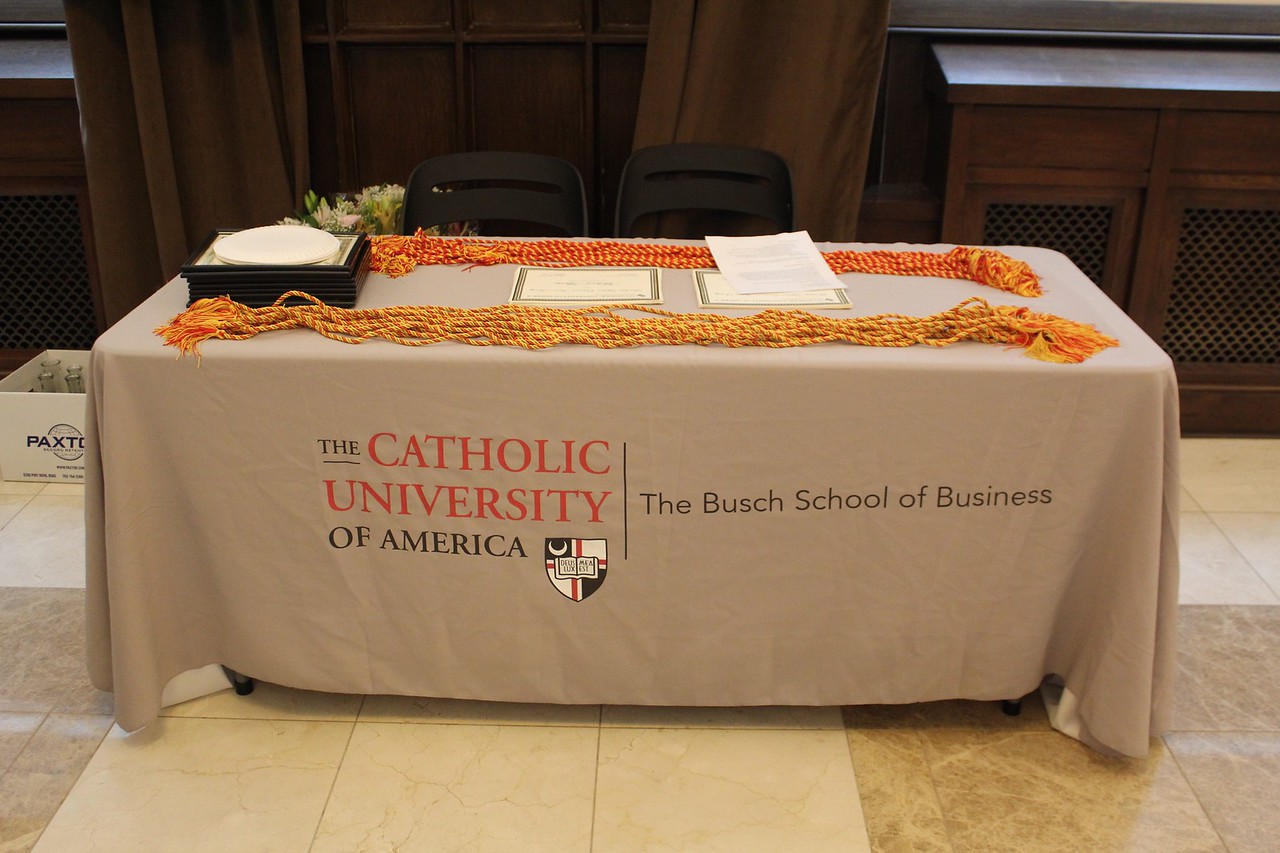 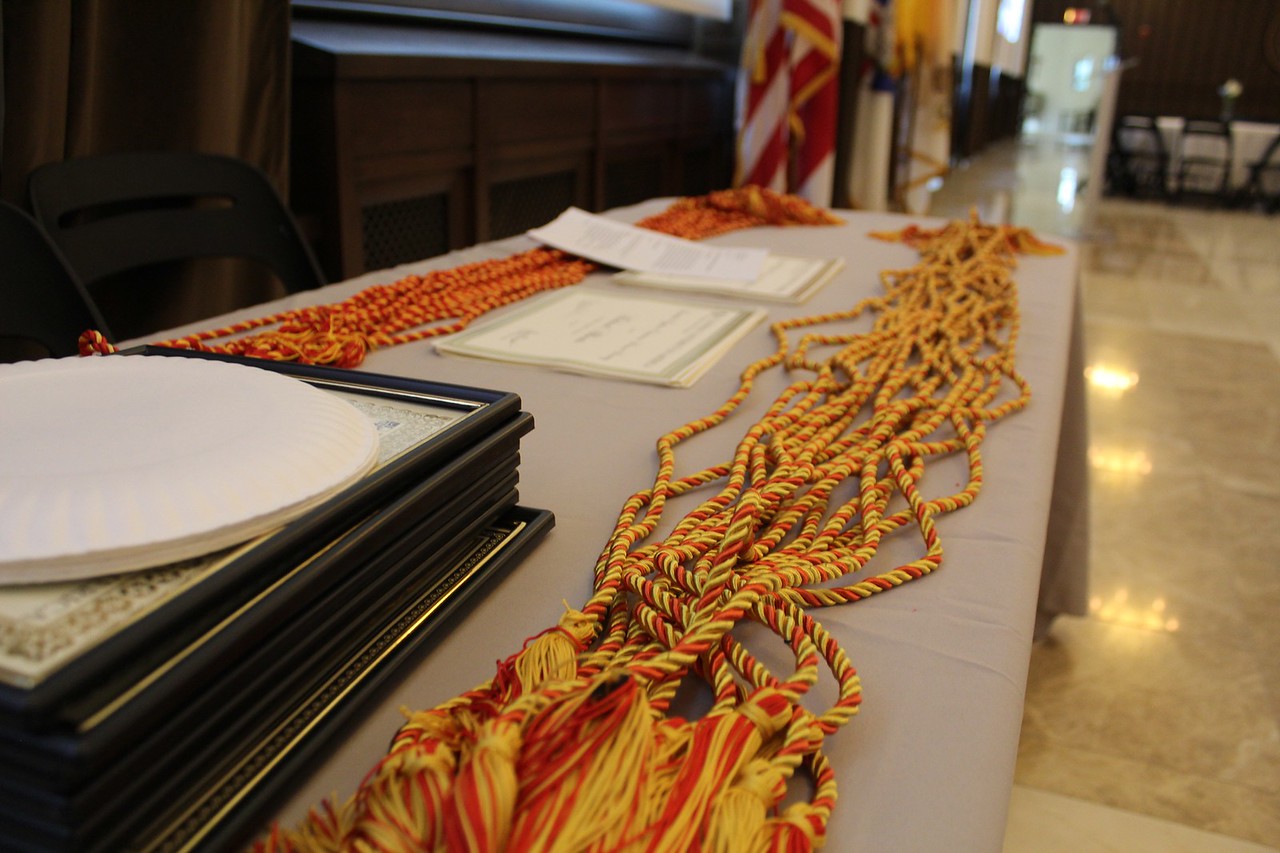 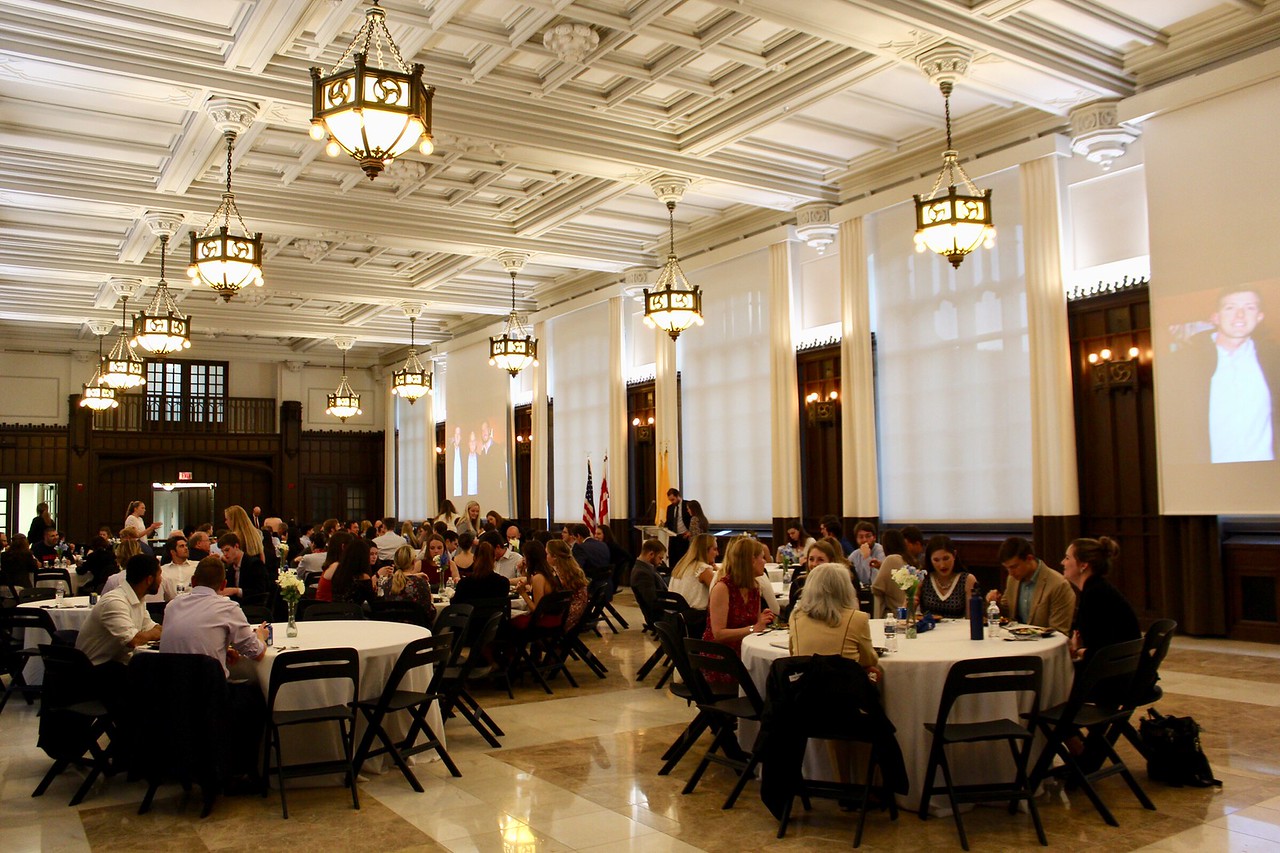 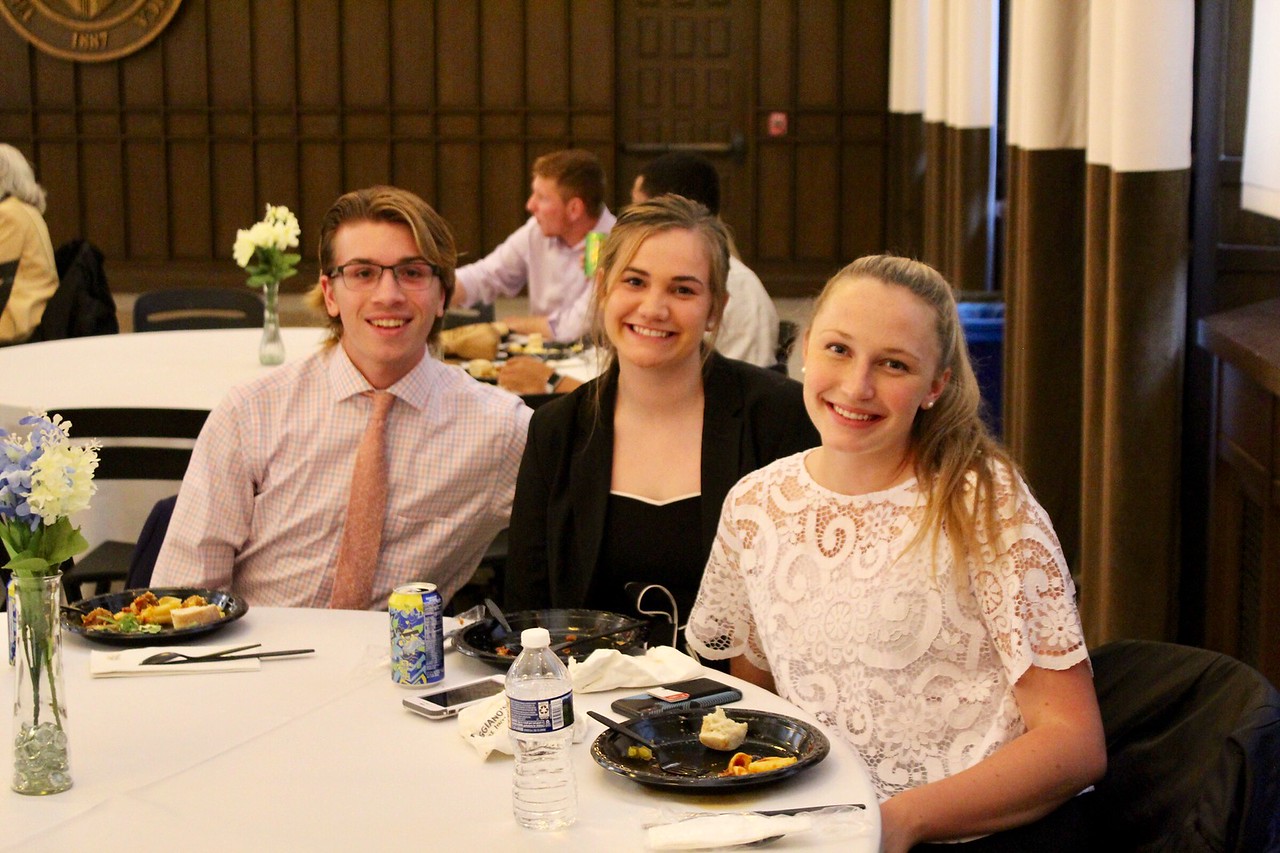 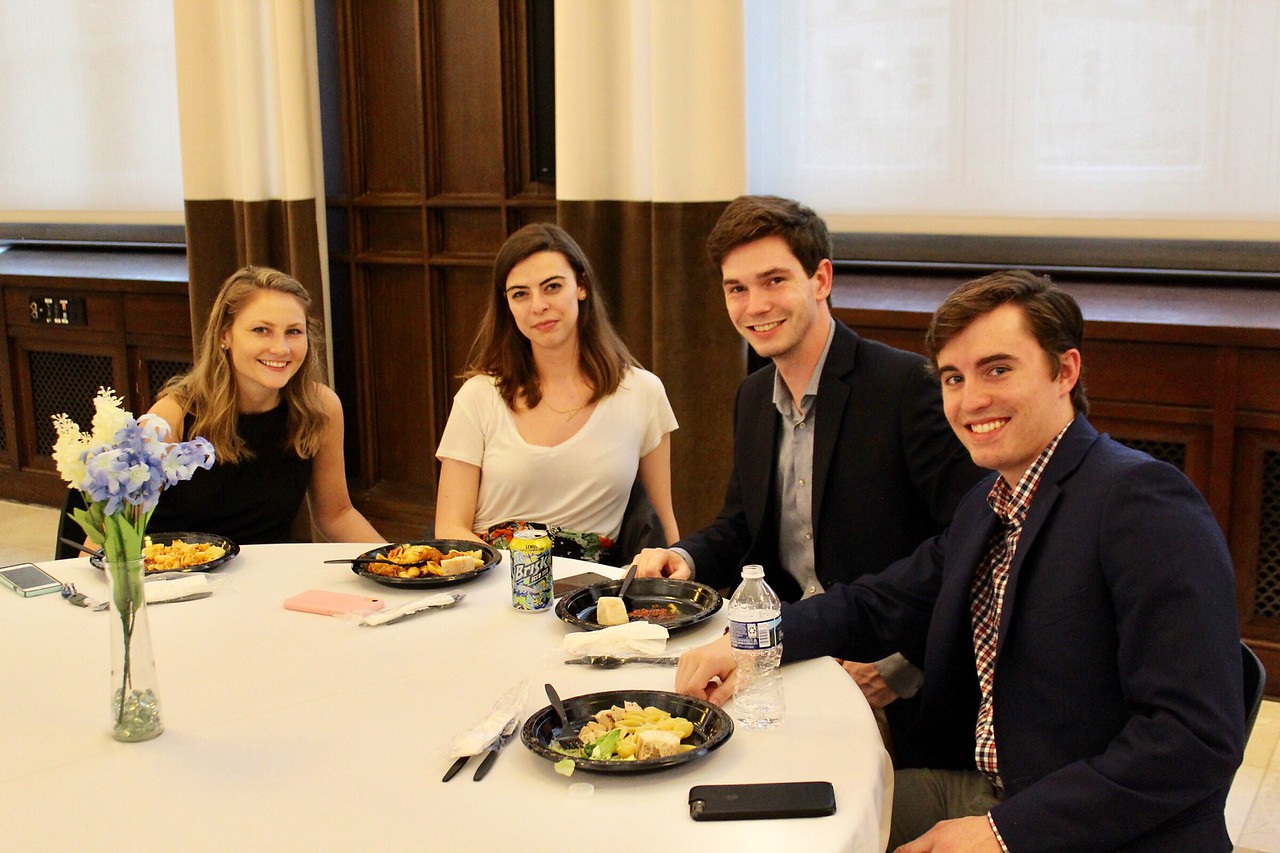 On Thursday, May 2nd, the Busch School of Business hosted a Spring Banquet to celebrate the end of the 2018-2019 academic year and the many successes of those in our Busch School community. This was a particularly special night for the seniors who won our senior awards. Faculty and staff were asked to nominate students that best exemplify the principles of Catholic Social Teaching in their studies and in their lives. The following awards represent the pillars of Catholic Social Doctrine, just as these students are very much pillars in our Busch School community.

This award is given to a graduating senior who has shown the greatest demonstration of scholarship, character, and service in all areas of Catholic Social Doctrine. This student has given of her time in service to the university community and exemplifies our mission each and every day, both inside and outside the classroom! The following quote is taken from one of the nominations this students received:

This student, who seeks to be a force for good in everything thing he does, is a fantastic representative of the Busch School of Business. As a member of the Busch Admissions Team, he attended countless events, participated in student panels, and shared his experience as a business major with prospective students. As a Major Mentor, he was eager to help first year students adjust to college life. He is a great teammate in the classroom and on the football field. This student is very well respected by his peers and the faculty and staff at the Busch School community. His overall presence and kindness makes him person you will always want to stop and talk to. He is so genuine, so eager to help others, and always does so with a smile on his face. He is going to continue to be a force for good as he leaves the Busch School as he begins his Career with Lincoln Financial this summer. We are so excited to see all that he accomplishes.

The recipient of the 2019 Force for Good Award is Michael Alberto. 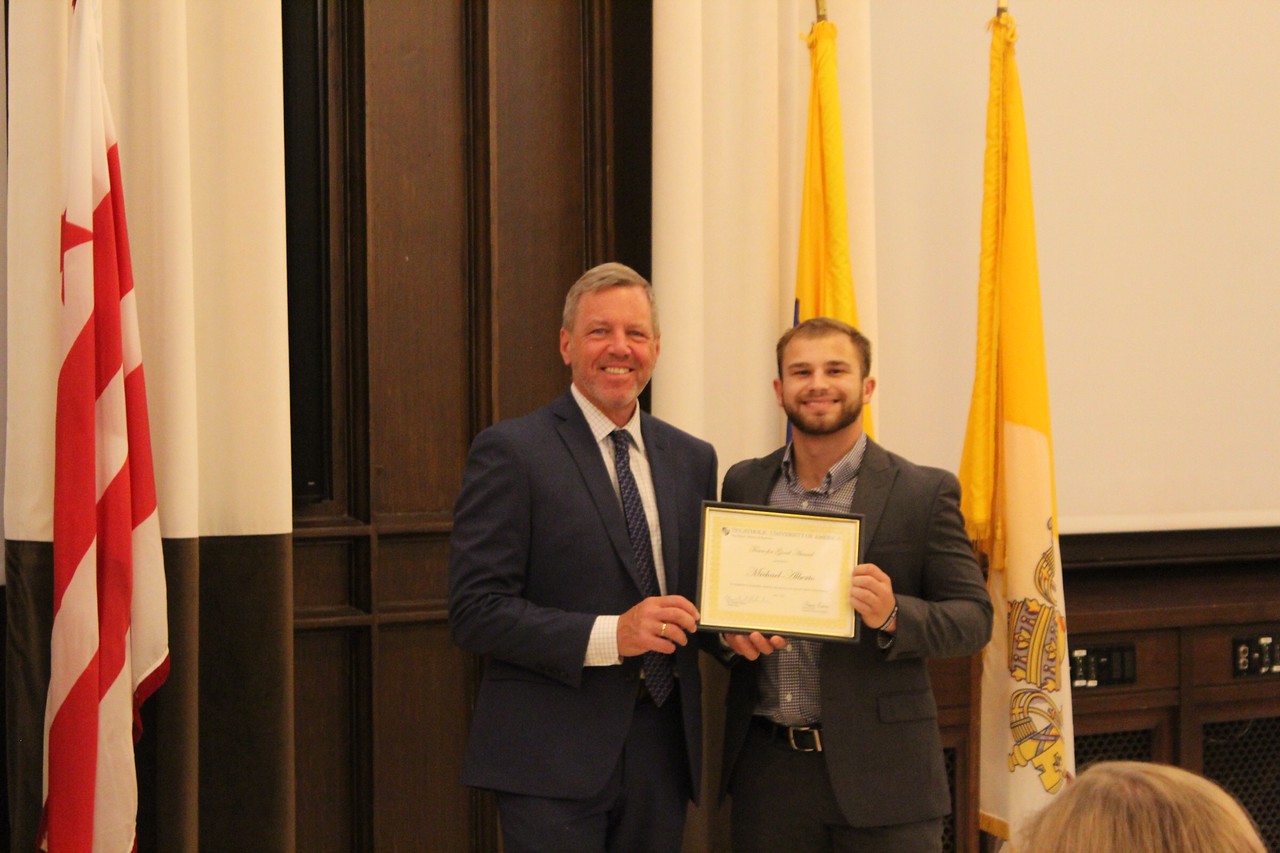 This award is given to the student who recognizes the beauty and dignity of each individual person. This student places people first, and demonstrates his or her understanding of this principle through daily interactions with friends, professors, and colleagues. The following quote is taken from one of the nominations this students received:

This students is one of the most respectful students I have encountered at CUA. She has demonstrated her virtues and understanding of the human person in my class, especially in discussion about the human person and labor, as well as in her work in service of the Busch School of Business. This student is very involved in the Catholic University community and encounters many different people in the work that she does. She treats all of these people with respect and dignity and because of that she is very deserving of this award.

The recipient of the 2019 Excellence in Human Dignity Award is Cassandra George.

Excellence in the Common Good Award

This award is given to the student who exemplifies excellent stewardship of the gifts and talents he or she has received in service to the school, and has encouraged that same stewardship in others. This student consistently cares for the common good of his or her classmates, professors, and community. The following quote is taken from one of the nominations this students received:

The recipient of the 2019 Excellence in the Common Good Award is Joseph Enzler. 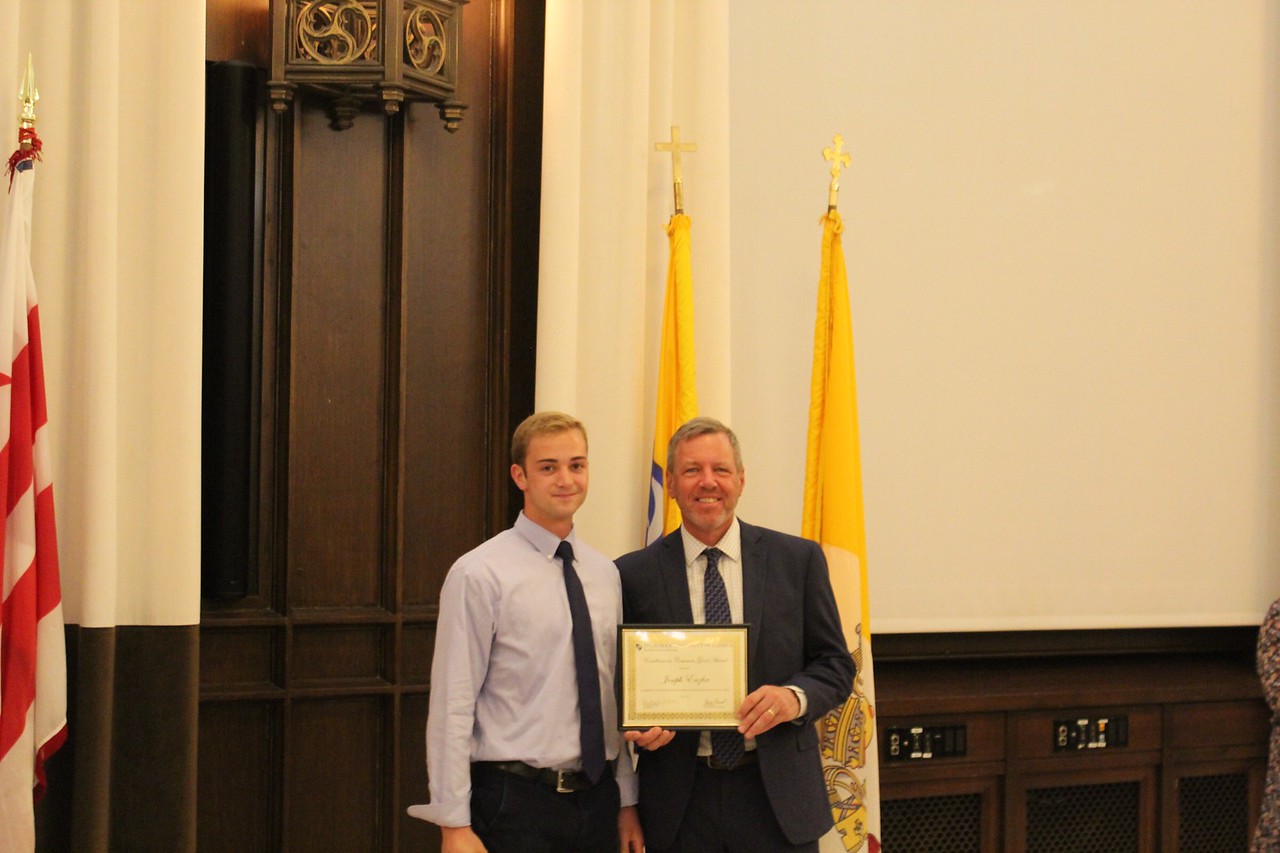 This award is given to the student who consistently demonstrates his or her ability to be a team player. This student goes out of his or her way to help someone in need for the good of the class, the school, or society. The following quote is taken from one of the nominations this students received: This student is a crucial team member at the Busch School. She understands the importance of motivating others in order to accomplish large, seemingly impossible tasks. A natural leader, she is able to work with all types of individuals and never ceases to grow tired of always giving her best work. In class, she contributes to educating and informing those around her. Outside of class, she has been involved in numerous Busch School team initiatives, including the Major Mentor Program, Busch Admissions Team, and the Dean’s Student Advisory Council. She works to bring out the best of people around her in all of the different teams she is involved in. While doing so,she remains a fiercely loyal and genuine friend. This student has dedicated a large portion of her time as a student at Catholic University to making the Busch School of Business and those around her the best they can be.

The recipient of the 2019 Excellence in Solidarity Award is Briana Marcinauskis.

This award is given to the student who best exemplifies personal freedom and responsibility. This student takes ownership of his or her decisions and entrusts similar care of responsibility in classmates, teammates, and peers.

This student  is an exceptionally kind individual, who never passes on the opportunity to demonstrate to others how much they matter to her. As an avid giver of gifts, this student is always thinking of ways she can brighten others peoples’ day. She developed a small business idea called "Community of Love", to bring companionship to elderly people living alone or in assisted living facilities, be engaging local families as volunteers and connecting them with people in need. This builds a more Christian culture at the local level. This student will also be leading a mission trip to El Salvador this May. Here she will lead her group of peers throughout meetings with local Salvadorans, learning about the difficulties and injustices they face. There are many ways this student is a wonderful representation of subsidiarity.

The recipient of the 2019 Excellence in Subsidiarity Award is Erin Lynch. 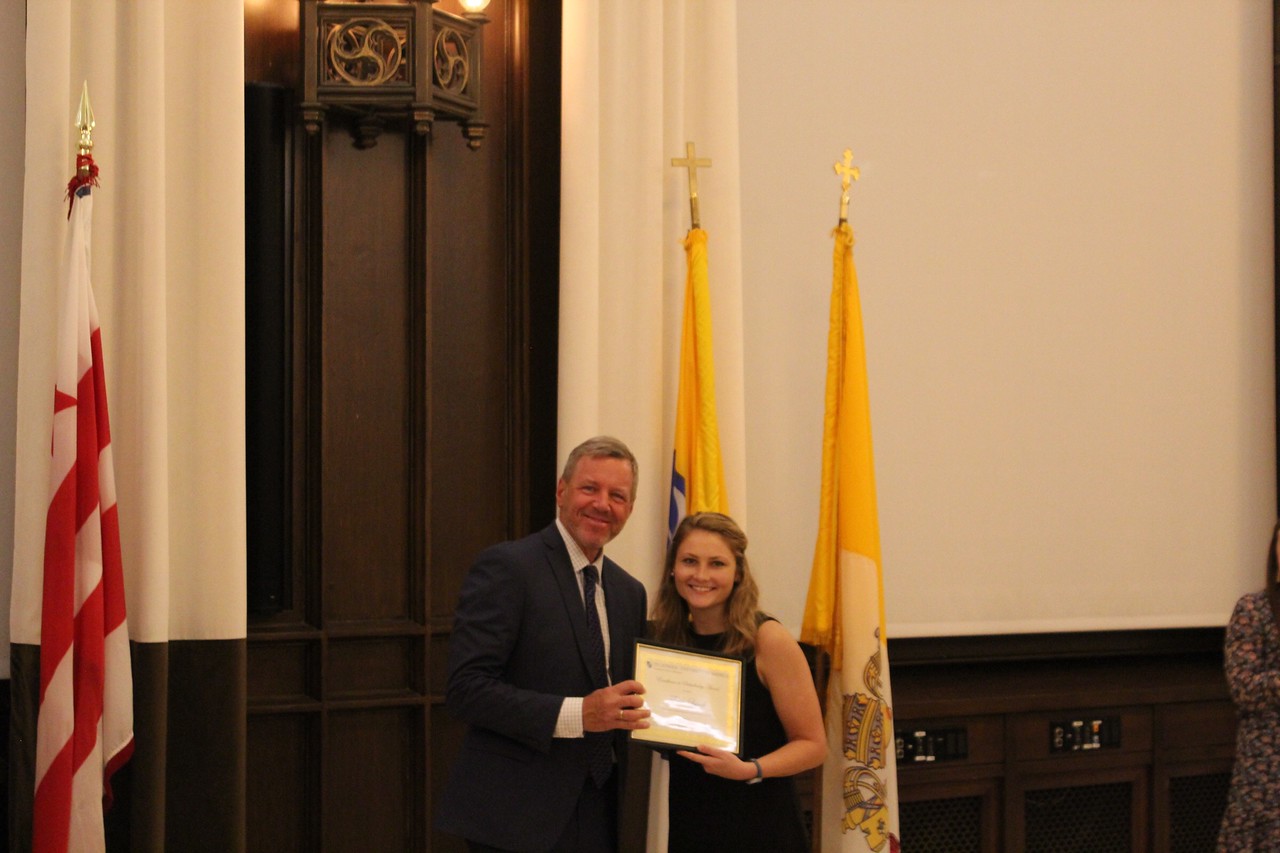 Congratulations to all recipients of the 2019 Busch School senior awards.